With Zika in the media so much lately… it is important to know the real facts!

Zika virus has been a widely discussed health concern recently. Zika virus is spread by Aedesmosquitos in areas with these mosquito types. If someone contracts Zika, there typically are mild to no symptoms shown. Should someone develop symptoms, they would likely be rash, joint pain, fever, red eyes, headache, or muscle pain. Zika will likely clear itself out of the body within one week. At that point, the person would then have immunity to future infections. 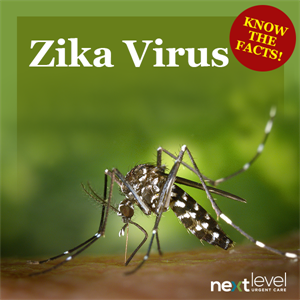 Zika virus only becomes an issue when it is contracted by pregnant women or women looking to become pregnant in the near future. If a pregnant woman contracts Zika, it can be passed to a fetus and result in microcephaly (abnormally small head) or other birth defects. It can be sexually transmitted from person to person which should be a consideration for someone that could become or is looking to become pregnant.

Currently, there are no reported cases of mosquito borne spread of the Zika virus in the United States. Travel to other countries where Zika could be transmitted via the Aedes mosquitos is where the problem lies. Currently, spread of Zika virus has been reported among countries in the Caribbean, Central America, Pacific Islands, and South America. Among US territories, Zika has been spread in American Samoa, United States Virgin Islands, and Puerto Rico.

Because the 2016 Summer Olympics are being held in Rio, a place in which Zika is currently being transmitted both via mosquitos and sexual activity, there has been a high volume of reporting on Zika virus and its potential impacts. Due to Olympic athletes coming to this region from all over the world, as well as spectators, media has widely covered Zika in Rio because Rio is in the international spotlight.

What does this mean for you? If you are pregnant or may become pregnant, it is very important to watch CDC travel advisories for regions to avoid that may have Zika virus currently being spread. Being aware if a sexual partner has traveled to one of these countries is important but using appropriate safe sex measures would take care of any risk.

Outside of pregnancy or the possibility of becoming pregnant, Zika virus is little to no threat for others. Due to the fact that the body clears Zika virus, typically, within one week after contraction with little to no side effects, the general population should not have heightened health concerns. recommendations for treatment of potential contraction of Zika include rest, making sure to maintain adequate hydraBon, and taking acetaminophen to promote the immune system’s ability to clear the body of the virus.

While travel warnings should not be taken lightly, the important piece is to look at the area being traveled to and the possibility of contracting the virus that could have any impact on you. The majority of the population is not pregnant or looking to become pregnant so the actual risk posed to most people is very little.